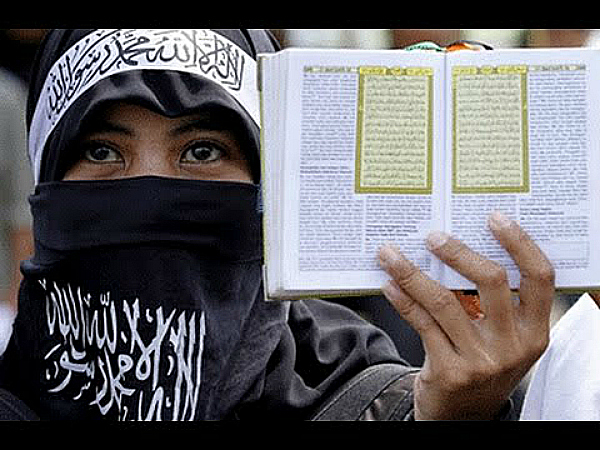 I have been trying desperately to find ways in which your shocking behaviour offends your own ‘religion of peace’ – but given all that you have done, and all that I have read in the Qur’an and the biographies of Muhammad, I cannot.  Your appalling actions are in accurate accordance with both your scripture and the exemplary example set by the perfect Muslim, Muhammad.  I’d like to say that severing the hands of thieves is a gross violation of your “peaceful” religious codes of conduct, but it isn’t (Qur’an 5:38-39, Sahih al-Bukhari 8:6789 & Sahih al-Muslim 3:4175-79).  I would have loved to have picked up the Qur’an and hadith and found passages therein that expressly forbade the raping of Muslim and non-Muslim women, but alas, I found that here again you were acting in strict concordance with your scripture (Qur’an 2:223, 4:3, 23:5-6 & Sahih al-Bukhari 1:367 & 5:522).  It would have made my day to read that no Muslim is allowed to cunningly and greedily extort non-Muslims for protection money in similitude to a criminal syndicate, however, once again, I found the opposite to be true (‘Jizya’: Qur’an 9:29, Sahih al-Muslim 19:4294).

To my utter dismay, I scanned the entire corpus of your most reliable Quranic commentaries and compared the teachings expounded upon therein to the atrocities you have committed, from driving out non-Muslims from Muslim lands (Sahih al-Muslim 19:4366 & Sahih al-Bukhari 3:531), the murdering of infidels (Qur’an 2:191), to the violent jihad you have undertaken (Qur’an 4:94 & Sahih al-Bukhari 2:1:35, etc., etc.,) – yet, each and every atrocious act you have enjoyed can be credited to the Quran and your religion’s most admired man, Muhammad.

For a brief moment I found relief in the more peaceful Meccan chapters and verses of the Qur’an, but such relief was rudely interrupted by the revelation that those chapters and verses have been abrogated by a tradition you refer to as ‘Na’skh’ (Qur’an 2:106 & 16:101) – and that the majority opinion amongst Islamic scholars on the matter dictates that the violent Medinan verses have nullified the more peaceful Meccan ones.

I read through the Sahih (most reliable) hadiths hoping to find a way in which I could turn your religion against you, but all I found was a wellspring of scriptural justification. Muhammad raped (teenage) female prisoners of war (Sahih al-Bukhari 1:367 & 5:522), he ordered the beheading of non-Muslims and those who criticised him (Ishaq: 675), and his ambitions, as were revealed to me by a careful reading of your sacred scripture, perfectly aligned with your own.

Given all I have found, I must regretfully concede that you are practicing your religion correctly.  In light of this concession, I no longer assign all of the blame to your violent and heinous organization – instead, I now reserve a large chunk of that blame for the religion which has provided you with your maniacal manifesto.