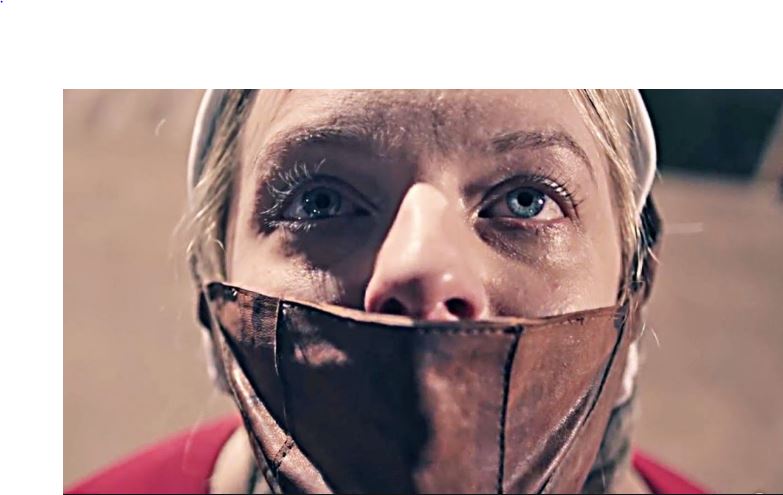 Christianity has always been a misogynistic religion, antithetical to women’s rights. Its foundation in Judaism and its historical context, having been invented in the first few centuries of the Common Era, lend its teachings to a type of fanatical anti-woman pile of dogma shit.

A woman should learn in quietness and full submission. I do not permit a woman to teach or to assume authority over a man; she must be quiet. For Adam was formed first, then Eve. 14 And Adam was not the one deceived; it was the woman who was deceived and became a sinner. But women will be saved through childbearing—if they continue in faith, love and holiness with propriety. ~1 Timothy 2:11-14

According to the central tenets of the Christian ideology, a woman’s only way out of an imaginary hell is to submit herself to a terrestrial one, where she is nothing more than a quiet, passive and oppressed baby factory, a handmaiden, if you like. Her mind is of no consequence to humanity. Her qualities as a human being overshadowed by the dictates of ancient and ignorant male goat herders. A woman’s place is exactly where her patriarch commands it to be. Surely following the Enlightenment secular democracies should have outgrown this ludicrous and self-defeating form of religious patriarchy, but I am not so sure after seeing the religious Right in the US successfully overturn Roe V Wade, a secular precedent that ensured women were granted control over their own bodies – granted, as if someone’s individual autonomy and sovereignty is something to be granted or denied. The most insane thing about religion’s influence over society is that even those who are the most aggressively targeted for oppression by the religion still stand up to protect it, as can be seen by scores of pro-Life Christian women still fighting for the right to have no real rights. It is Stockholm syndrome on a societal scale. Since there is no way to reason a person out of a position they didn’t reason themselves into, it is probably best to evince their own imaginary friend’s true position on abortion.

God Loves Abortion!
God loves abortion so much he commanded it on several occasions.

Magical Abortion Juice
Then the Lord said to Moses, “Speak to the Israelites and say to them: ‘If a man’s wife goes astray and is unfaithful to him 13 so that another man has sexual relations with her, and this is hidden from her husband and her impurity is undetected (since there is no witness against her and she has not been caught in the act), and if feelings of jealousy come over her husband and he suspects his wife and she is impure—or if he is jealous and suspects her even though she is not impure— then he is to take his wife to the priest…‘The priest shall bring her and have her stand before the Lord. Then he shall take some holy water in a clay jar and put some dust from the tabernacle floor into the water. After the priest has had the woman stand before the Lord, he shall loosen her hair and place in her hands the reminder-offering, the grain offering for jealousy, while he himself holds the bitter water that brings a curse…here the priest is to put the woman under this curse—“may the Lord cause you to become a curse among your people when he makes your womb miscarry and your abdomen swell. May this water that brings a curse enter your body so that your abdomen swells or your womb miscarries.” ~Numbers 5:11-22.

But what about the fetus?!!!! According to the logic of many pro-Life Christians, God just authorised the slaughter of unborn babies. Now, for those of you who have actually read the Bible, you will know that the central character in this fiction has no problem murdering anyone. He had 42 kids eaten by a bear for teasing a bald man (2 Kings 2:23-24), he drowned 99.9% of his children in a flood (Genesis 6:1-8), he killed his only begotten son, he killed all the first-born sons of Egypt (Exodus 11:5), he turned Lot’s wife into seasoning for simply looking over her shoulder (Genesis 19:26) – I mean, if this guy gets bored, you just know he is going to create some sick Squid Games to amuse himself and assert his authority. But let’s examine this passage from a legal-like point of view. God sanctioned abortion in cases of cheating wives. This means, God believes there are circumstances that warrant abortion, regardless of the rights of the fetus. Also, examining this passage, he supports forced abortions, because the women in this scenario have no say in the decision to keep or abort their fetuses. The husband, the man, gets to decide whether a woman keep or abort her pregnancy. Roe v Wade placed the inalienable right to regulate one’s own body in the hands of women, because the decision was not made by Right-wing religious nutbags, but by a sober, rational, secular court of law, an institution that can only operate effectively beyond the control of deluded and self-interested religious lobbyists.

Ancient Drive-Thru Abortions
Drive-thru abortion may be slightly misleading. Drive swords through pregnant women’s bellies would be more accurate. On more than one occasion, God sanctioned the most vile and violent form of abortion. He commanded that his chosen people conquer their enemies and cut open pregnant women’s bellies and smash their fetuses on rocks. But what about the fetus?!!!!

Samaria will bear her guilt because she has rebelled against her God. They will fall by the sword; their little ones will be dashed to pieces, and their pregnant women ripped open.
~Hosea 13:16 (See also: 2 Kings 8:12, 15:16; Amos 1:13)

Again, God signs off on another form of abortion. This form of abortion, like the magical abortion juice, takes the decision out of the hands of women and places it in the hands of delusional men who thought it righteous and Godly to abort a fetus by brutally slaughtering its mother in the process.
The Bible is not a book modern human beings should use as a basis for morality. The Bible is a compendium of ancient torture pornography and toxic misogyny. Notice that abortion is acceptable in the Bible, but only on a man’s terms, which, for most sane people living in 2022, is simply an unacceptable dogma. Should a society make the mistake of entrusting its laws to a book so vile, so anti-human, so anti-woman, then it can expect to reap its rotten fruits. Christianity should be declared a mental disorder in this Age of Enlightenment.